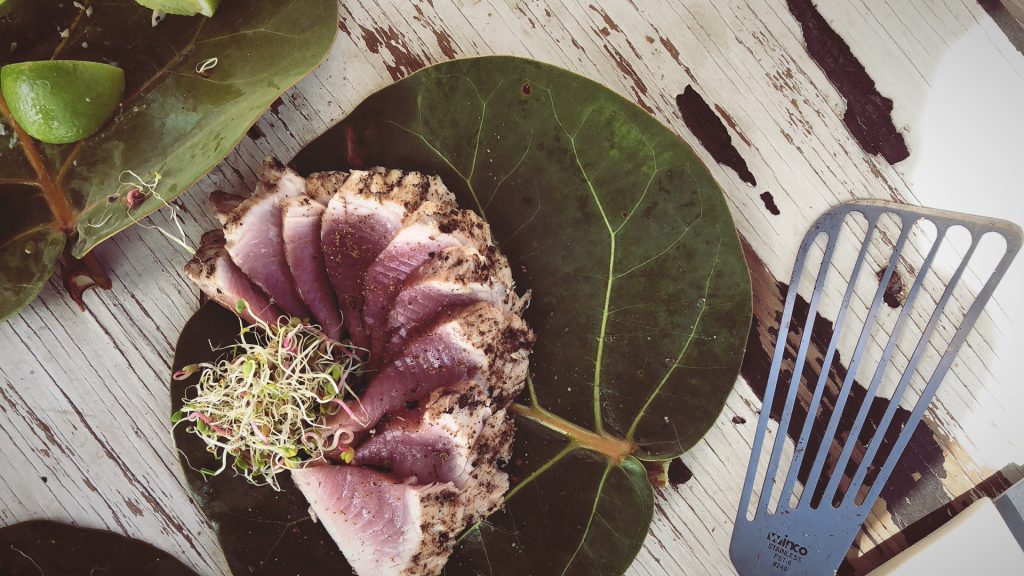 An afternoon with friends and family.

What do you do when your friend texts and says, “ Just bought 5 lbs of fresh tuna,” and all you can think about is, “What’s for lunch?” Well an impromptu beach date of course! I mean who better to invite than family? So naturally I hopped in my truck to meet up with my cousin beforehand.

Even though the shores of the Big Island are littered with an array of beautiful white sand beaches, only a select few are equipped with ready-made grills. One of which would be needed for this task. Given we were all already downtown, the bay at Altona Lagoon seemed like the best option to pull this off as it was just a few minutes away.

We were on our way after a quick stop to procure the essentials at the grocery store. Five pounds of fresh Bonito, some Crucian pound seasoning, limes, micro-greens, Olive oil, and my chef kit were all we needed. 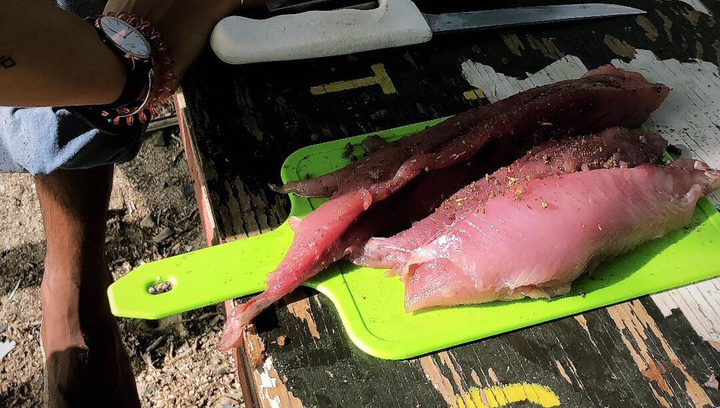 Once on location Fefe, Anais and I set up shop at the first grill we saw. This location was ideal as the grill and prep station were both merely feet away from the tides washing onto the sea shore. A necessity when cooking on the beach, as the ocean becomes your dishwasher and your green waste disposal. Next we scoured the immediate area for both tinder and firewood to get the grill started. After lighting our fire we turned our attention to the Bonito! 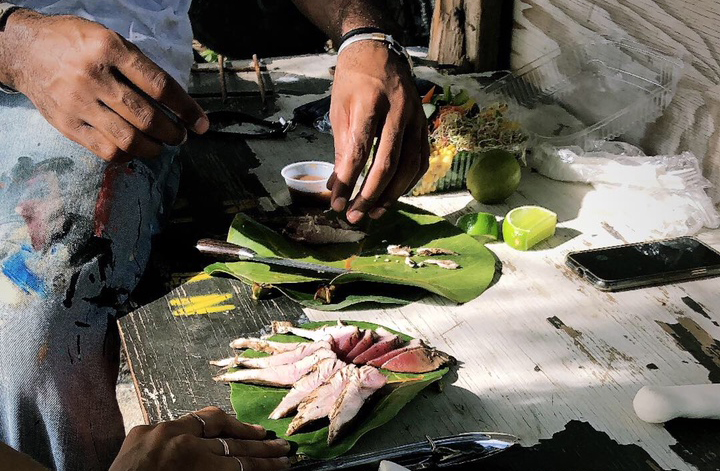 Filleting is not an easy task but with the right blades anyone can feel like a pro. A few slits down the center to remove the bloodline and pin bones. Then off with the belly. After that a run of the blade from tail to head to remove the skin and, voila! Tuna fillets ready for the grill. By this time the flames and smoke had subsided and the coals were forming.

We grabbed each fillet and generously coated them in Olive oil before seasoning them with a special Crucian blend. One by one we threw them on the grill for a quick sear. Flip, flip, flip, and that was it. Tuna seared to perfection.

Keeping with the theme of less waste we opted for eco friendly dinnerware that afternoon.

Fefe and Anais procured and cleaned Sea Grape leaves in anticipation. Simultaneously, I was standing at the prep station preparing to slice each fillet on the cutting board. It only took but a few strokes of the blade and we were ready to enjoy. Sea Grape leaf, Bonito microgreens and a lime wedge to top it off.

“Time for the taste.”

Just as fast as it had begun it was time for it to end. Leftovers were packed away, ecoware were tossed into the flames. Fish scraps were discarded into the tides, and the grill doused with a cup of seawater.

As if the trio had never descended upon the lagoon for an impromptu mid afternoon lunch, the only telltale evidence left in our wake was a smoldering pile of coals.

“Only if we can get more Bonito,” I answered.